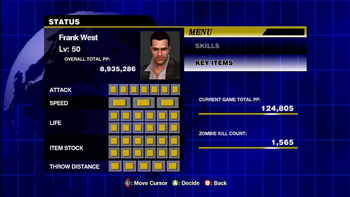 As Frank levels up in Dead Rising, he'll learn new skills and moves. Below is a list of all of the 24 moves available to Frank.

Leveling is a system by which the player can increase Frank's talents and attributes. You can level up by obtaining numerous prestige points throughout the game, either by killing a certain amount of zombies, taking pictures, especially Photo Ops, or by doing other things in the game. Leveling affects Health, Inventory, Throw, Skills, Speed, and Attack. If a player reaches level 50 in the game, they will earn the Level Max achievement.

As Frank levels up, he learns new skills. What Frank earns as he levels up is different for each player. For example, player one may have a health block and the Jump Kick by level 3, while player two has an inventory slot and the Zombie Ride instead. It is different for everyone and, with the exception of Zombie Walk, there is no set level for each skill.