Start a Wiki
watch 01:50
The Loop (Games)
Do you like this video?
Dead Rising 2
Cases and Missions • Characters • Weapons • Stores • Endings

Dean was one of the hundreds of spectators at the Fortune City Arena to watch the Terror Is Reality show. When the outbreak began, he tried to flee the stadium but was attacked by zombies and killed in the lobby. His body is then feasted upon by the zombies. 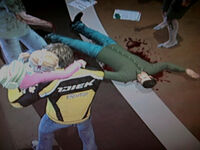 Add a photo to this gallery
Retrieved from "https://deadrising.fandom.com/wiki/Dean?oldid=385767"
Community content is available under CC-BY-SA unless otherwise noted.