One of four buddies who vow to keep America safe by taking out those responsible for destroying the country - which for them is pretty much anyone still left alive.

"But we got a chance to be real patriots here, Earl. And get us some target practice! These so-called survivors, Ha! Bunch of whiners let this thing happen."
—Deetz Hartman

Deetz Hartman is a psychopath appearing in Dead Rising 2 during the unannounced mission Militia Men. He is located on rooftop of Juggz Bar & Grill (access behind the building). He reappears in Dead Rising 2: Off the Record with the same role.

Deetz, along with a couple of friends, make up the group known as the Militia Men, a group of rednecks bent on reconstructing America by taking out all those who have ruined it, survivors and zombies alike. Deetz made his point by shooting a lonesome man who was innocently wandering through Fortune Park. After talking and drinking with his buddies, he splits up and takes position on the rooftop of the Paradise Platinum Screens theater. Chuck finds him on the rooftop with his sniper rifle and kills him.

Climb up the ladder next to the Maintenance Room and Juggz Bar and Grill to take him on using melee attacks. Knife Gloves are efficient, as are any other powerful and fast attacking combo weapon. A safe way of killing Deetz is to climb on top of the awning above Platinum Screens. If you position Chuck/Frank correctly, you can hit him with any firearms but he won't be able to hit you. 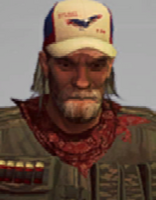