One of four buddies who vow to keep America safe from zombies by taking out those responsible for destroying the country - which for them is pretty much anyone still left alive.

"Only way to get this country on track again is clean it right up of all those pansies, floozies, bur-o-crats, liberals and them half-ass conservatives too."
—Derrick Duggan

Derrick Duggan is a psychopath in Dead Rising 2 who appears in the unannounced mission Militia Men. He is a member of a group of hunters bent on killing survivors and zombies alike. He reappears in Dead Rising 2: Off the Record with the same role.

In Militia Men, Derrick and his hunting pals murder an innocent man that was wandering in Fortune Park. He and his friends go on about how they believe the zombies and survivors are communists sent to destroy democracy. They are determined to cleanse America of these "traitors", one city at a time.

Derrick is found on the roof of the Atlantica Casino that can only be accessed from a room near the indoor underground access north of the casino.

Derrick will attempt to shoot Chuck with his sniper rifle and has a lot of room to do so, especially when Chuck first climbs up. He can move behind the air condition unit and Derrick will be forced to move closer to Chuck. Chuck can then either step in and out of cover to shoot him, or he can rush him with a melee weapon.

He uses a machete for melee attacks, and his speed is deadly, so hit him quick and move away. 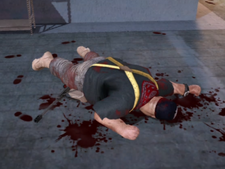 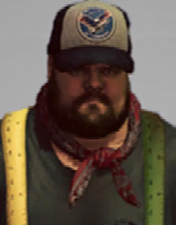 Poster of Derrick in Dead Rising 3.