"I killed 48 of 'em during the big outbreak, I ain't gonna let no dead un's get me now."
—Doris, after being rescued

After the outbreak, Doris and Chad were separated during the outbreak and were supposed to meet up at a spot they picked out, but the number of zombies made it difficult to do so. Doris is atop a Souvenir Kiosk surrounded by zombies. She is shooting and fighting back the zombies as she calls out for her husband for help. She will only join Chuck if her husband is brought with him, or informed that he has been evacuated to the Safe House already.

Doris is one of the crazed survivors Frank can fight in Sandbox Mode. She will spawn in Finders Peepers in Palisades Mall with an LMG. Once defeated she drops her weapon and $10,000.

Doris above the souvenirs booth.

Doris is brought back to the shelter. 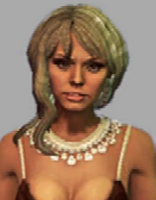 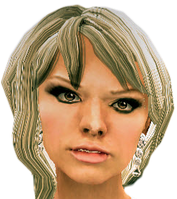