"They weren't even close, soldier. I was pinned down by fifty rebels once and I got outta that with nothing but a toothpick!"
—Doug

Doug Trent is a survivor and posse member in Dead Rising 3.

In the main game, he and Red ambush Nick when he first comes to the Los Perdidos Communication Tower during Chapter 3. Afterwards, he can be seen on the top floor of the tower, but he is not recruitable. He is later encountered during the side mission The Hunted in Chapter 6. If he is saved, he becomes a possible posse member.

His most prominent role is helping Angel Quijano in the Fallen Angel DLC. He acts as a major supporting role and is one of the most important characters. Although he criticizes Angel heavily for her drinking problem, he seems to trust her with important responsibilities. Angel often called him "Dougie," much to his disdain.

Jamie will call and explain to Nick that one of his "illegal friends" is holed up at the train station in South Almuda and is in trouble.

When Nick arrives, Doug is defending himself against several Spec Ops who have him cornered. Defeat the soldiers and then speak to Doug. He will join Nick's posse and can be recruited from the survivor board at any time. He is the first survivor that Nick must rescue during the mission, along with Winnie and Lauren.

its possible he escaped the city by getting on the plane or escaping elsewhere in the city thanks to Rhonda and Gary.

Doug plays a major supporting role as Angel's partner. Doug sends Angel on many jobs throughout the story and talks to her using a transceiver. He helps Angel to defend the high school against soldiers, to set up the new safe house at the communication tower and to set up soldiers for interrogation.

Doug during The Hunted. 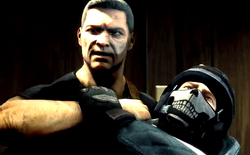 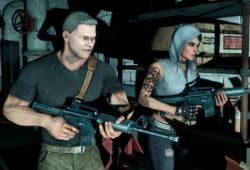 Add a photo to this gallery
Retrieved from "https://deadrising.fandom.com/wiki/Doug_Trent?oldid=398049"
Community content is available under CC-BY-SA unless otherwise noted.