"There's a guy in the North Plaza. He's got a shotgun and he's takin out the zombies! He could help us out, so go give him a hand!"
—Otis Washington, Dead Rising: Chop Till You Drop

It takes place in North Plaza at late night of the third day. It involves a lone survivor armed with a shotgun blasting his way around the North Plaza.

A man dressed in a tuxedo can be found in the North Plaza, armed with a shotgun. He calls out to Frank West when he approaches him and Frank will explain to him that there are other survivors in the Security Room and a helicopter is coming.

After hearing this, Kindell is a bit skeptical, but decides that he can check the place out and follows Frank back. 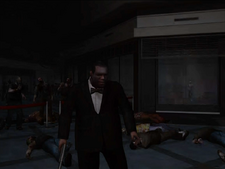 Kindell, armed with a shotgun.

Reaching out to Kindell.

Retrieved from "https://deadrising.fandom.com/wiki/Dressed_for_Action?oldid=389367"
Community content is available under CC-BY-SA unless otherwise noted.