It is placed on a zombie's head, which activates the drills and drills through the zombie's skull and brain. It is more of a weapon suited for comedic purposes than one practical for killing zombies, as it takes too long to kill to be useful. The player must also pick the weapon back up after each kill.

"It's a metal bucket with a few drills taped to the outside, pointing in. Slam it on a zombie's head and the drills will make short work of its melon. Yay!"[1]

In Case Zero, a combo card for the Drill Bucket does not exist; only a scratch card may be obtained by finding the required components and combining them.

In Case West, the combo card for the Drill Bucket is in the player's inventory from the start of the game. 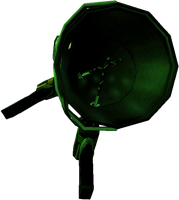