"Powerful arcs of electricity will fry any zombie within reach."
—Combo card description

When used against large clusters of zombies, the electricity will chain to attack more zombies nearby. The Electric Rake cannot be stored in the player's inventory.

Whenever the Electric Rake makes contact with a zombie via its thrusting attack, arcs of electricity will appear at its "head" for a brief period of time. If this part of the weapon makes contact with another zombie before the arcs disappear, regardless if the weapon is being thrust or not, electricity will arc more than normal. This can be done by turning Chuck quickly enough to hit another zombie without pressing the attack button. If done correctly between thrusts, the weapon can electrocute more zombies even if they are not in direct contact with the weapon.

The weapon still has its electrifying effect while being thrown, instantly killing any zombies that touch it during its travel time. In addition, the weapon also slides across the ground after being thrown, making it go relatively far. This makes the Electric Rake is a surprisingly effective thrown weapon.

"Imagine a rake. Now send millions of volts of electricity through it and then go and poke zombies with it."[1] 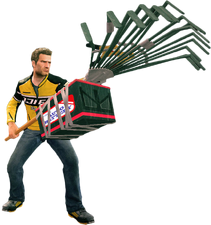 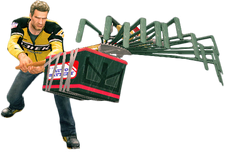