Owner of the Swept Away Wedding Chapel, and Fortune City Justice of the Peace. Father to Randy.

Emanuel Tugman is a victim in the Dead Rising 2 mission Here Comes the Groom. He is the owner of the Swept Away Wedding Chapel, who was forced to act as a marriage officiant for his son, Randy Tugman and his hostage, and was killed afterward. He reappears in Dead Rising 2: Off the Record with the same role.

Emanuel was held hostage by his son, and is forced to marry him and Danni. He pleads for his son "Randall" to stop, but is forced to continue the ceremony. As Chuck walks into the hall, he cries for his help; This results in a distracted Randy accidentally killing him with his chainsaw when he turns around to face Chuck.

Emanuel spawned in safehouse with help of Mod

Emanuel forced to marry his son to Danni.

Emanuel about to be killed. 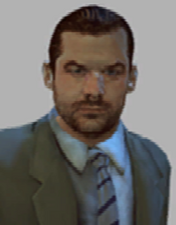