Below is a list of all possible endings in Dead Rising 2.

There are six different endings available. The final ending achieved by the player will depend on the actions throughout Chuck Greene's journey in Fortune City.

Ending S was the original canon ending before the release of Dead Rising 2: Case West, although in E3 2013, the developers confirmed this ending as canon. As of Dead Rising 3's Overtime Mode, Ending A appears to be the true ending, which was confirmed to be canon to the Dead Rising universe. 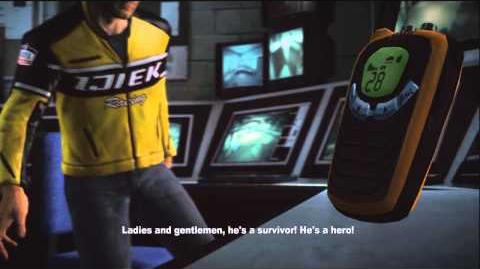 Method: Chuck completes all cases, but saves TK with Zombrex (TK is Infected). This will unlock the Overtime Mode.

After the credits however, TK will talk to chuck through the transceiver telling Chuck that he has both Katey and Stacey. During Overtime mode, Chuck will have to travel across the city collecting various items for TK. After Chuck has collected the items, he will need to return to the arena.

When Chuck makes it back to the arena, TK shocks chuck a couple of times knocking him unconscious. He then wakes up dangling from a rope watching Katey and Stacey slowly being dropped down, Chuck then climbs up the rope to try and raise Katey and Stacey. TK sees chuck climbing the rope and rushes to the platform and hits Chuck with his microphone, this initiates the final battle. Chuck manages to knock TK to the ground and then heads to raise Katey and Stacey. TK gets up however and tries to push Chuck over the edge but fails to do so and falls to his death, with the zombies already feasting on his body, Chuck raises Katey and Stacey up to the platform and they all walk away as a family, the camera slowly pans away until a zombie jumps up at the screen and screams loudly as a final scare to the player.

Failing to return to the arena in time will result in a cutscene where TK says "Aw, Looks like Mr. Chuckie Greene had other things to do with his busy schedule. And TK's plum out of patience." after he says that it shows Katey and Stacey slowly dropping into a group of zombies where they are ready to be eaten alive.

Method: Chuck completes all cases, but does not give TK Zombrex. 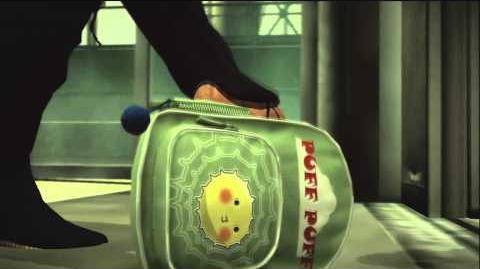 After withholding the firebombing, Chuck lands on the Safe House with the helicopter and finds Stacey and Katey, but Katey drops her backpack. Chuck goes to retrieve it, but just as he is about to pick it up, the zombified TK grabs his arm and forces him into the elevator full of zombies. Chuck throws the backpack to Stacey, shouts for the chopper to lift off, and for Stacey to take care of Katey. As the chopper lifts off, the scene transitions briefly back to the elevator. Chuck is floored by the zombies, while the elevator doors close. Inside, Chuck is seen holding TK off while the rest of the zombies surround him, before the screen fades.

A message states that a group of media choppers rescued the living survivors and that although Chuck is cleared of the charges and lauded as a hero due to Stacey Forsythe's information, it remains unknown if Chuck died from being eaten, infected, if the resumption of the firebombing killed him, or if he somehow managed to escape. The outbreak comes to be known itself as "Fortune's End", which it ends with it saying that Phenotrans' share prices continued to rise.

This ending is continued in the next game, Dead Rising 2: Case West, which introduces Frank West to the Dead Rising 2 storyline and expands on Chuck's initially-unknown fate. 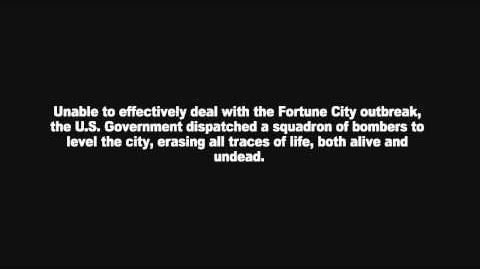 Method 1: Chuck fails a case after Case 6-1: Help Arrives that allows play to continue, and the time until the firebomb runs out.

Method 2: Chuck fails to catch or defeat Sullivan during The Facts before the time until the firebomb runs out.

A cut scene shows firebombs being dropped upon Fortune City as scheduled, wiping out any remaining survivors and containing the virus. After the scene, a text is shown, saying: Unable to effectively deal with the Fortune City outbreak, the U.S. Government dispatched a squadron of bombers to level the city, erasing all traces of life, both alive and undead. 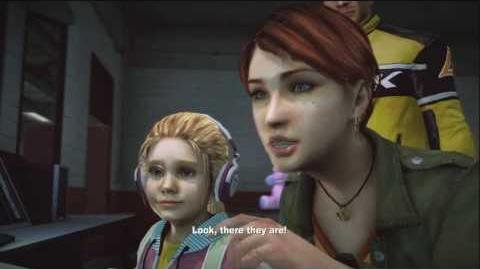 Method 1: Chuck fails the story (before Case 6-1: Help Arrives) but saves Katey with Zombrex and is inside the Safe House when the military arrive.

Chuck, Katey, and Stacey get ready to watch the military rescue, but they hear gunshots and screams. Chuck goes to investigate, but pauses when he sees the attacker (offscreen, but most likely Sullivan). Chuck is shot in the chest twice, killing him instantly. Then the screen fades to black. An epilogue reads that the military rescue of Fortune City was considered a failure and it is not known whether anyone survived as the city was firebombed. This ending is similar to Off the Record's Ending D in which Frank is also shot, presumably by Stacey. 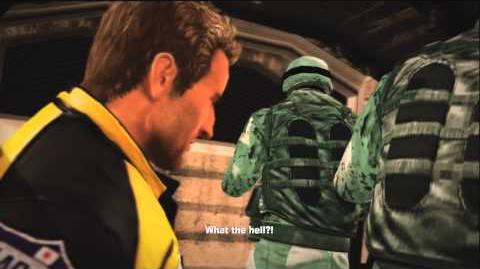 Method: The only requirement for this ending is for Chuck to be outside the Safe House when the military arrive after 72 hours.

Chuck awakens in the back of a military truck. The soldiers express their disdain at not being allowed to kill Chuck there and then, for they believe he is responsible for the outbreak.

Suddenly, they encounter something unexpected amidst the mysterious green gas and the screen fades to black. A message states that Fortune City was subsequently firebombed, eliminating any traces of life, while the outbreak was remembered as the "Greene Outbreak".

Method: Chuck doesn't manage to save Katey with Zombrex, thus failing all/any remaining cases and is still inside the Safe House when the military arrive. 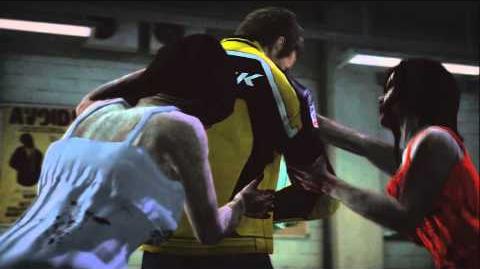 Chuck stands inside the Safe House holding Katey's backpack. Stacey tells him not to blame himself for Katey's death, and that they need to get going. Chuck however, doesn't respond, but instead just stares blankly at the backpack. Suddenly, zombies force their way into the room, and it appears someone has breached the Safe House. Chuck does nothing to prevent the zombies from dragging him to the floor and eating him alive, while Stacey watches in horror, soon to be the next victim. No living survivors were found and Fortune City was firebombed shortly after. The incident became known as the "Greene Outbreak".

NOTE: Regardless of whether Chuck has kept Katey alive with Zombrex or not, being outside the Safe House when the military arrive will result in Ending D.

Alternate Ending F: Chuck fails Overtime by not collecting all requested items/not reaching the Arena in time. Therefore, Chuck must complete all case files in order to unlock Overtime.

If going by the alternate method, a cutscene will show TK declaring that Chuck "had other things to do with his busy schedule" and laughs as he lowers Katey and Stacey into the zombies. A final shot shows the rope they are tied to shaking violently as the zombies eat them alive.

Otherwise, if Chuck fails to keep Katey and Stacey from going too low down, it will show Katey and Stacey as they are being lowered down into the zombie crowd before the final shot shows their rope shaking.

These alternative Ending F scenes are not considered an ending and will result in a game over.