Below is a list of possible endings for Dead Rising 3.

There are a total of five known endings that can be achieved depending on player choices. Ending S is the best ending, followed by C, D, and F. There is also an alternate ending to Chapter 8 that is not numbered.

Ending S is considered to be the true, canon ending.

Requirements: Complete all chapters and bring Rhonda to Gary.

After Red is defeated, Annie (who is now revealed to be Katey Greene) will reunite with her father, Chuck Greene, the elusive mobster who had been searching for her. Chuck managed to find Rhonda and Gary as well, and with the group together, Isabela urges that they board the plane to escape quickly. 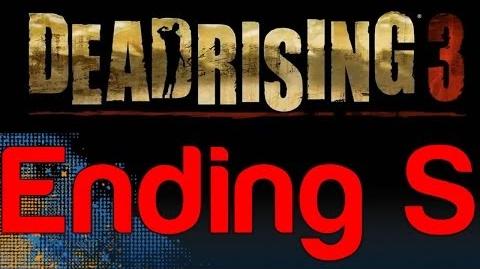 Gary and Rhonda volunteer to stay and rescue any remaining survivors and find another way out of the city. Nick is about to take off, however, he overhears on the radio that General Hemlock is planning to create a super weapon with the zombies, which will destroy the population but leave the infrastructure, making him extremely powerful. Nick and Chuck team up to stop Hemlock's plan.

After Hemlock kills Marian Mallon, he proceeds to go forth with the extraction of king zombies from the city. Nick and Chuck stop the machines from extracting them, and then Hemlock and Nick fight to the death. Before Nick kicks Hemlock into a spinning helicopter blade, he reveals that he has the cure within his blood. After his death, Nick, Chuck, and the others escape the city and eventually create and distribute a cure to the zombie infection.

After the credits, it is revealed that Isabela was the one behind the outbreak the whole time, convincing Mallon to begin the outbreak. Her goal was to start the outbreak so that number 12 would realize his immunity and come forward, successfully making herself the creator of the cure and clearing her family name from what Carlito did 15 years prior in Willamette. Back in the present, Isabella destroys the evidence of this and leaves the city with the others, making her elaborate plan a success.

Note: Unlike previous games, Ending A is the ending that leads into Chapter 8 and Ending S, making Ending S the true ending and Ending A the "gateway" true ending. 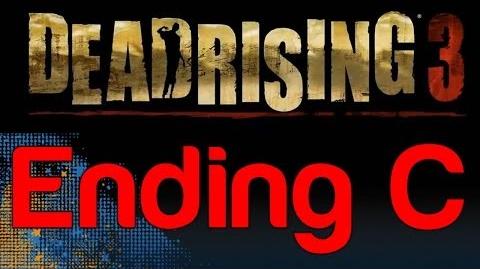 Requirements: Complete all chapters and kill Gary at the karaoke bar.

Shortly before dying, Gary tells Nick he's doing Gary a favor. Although feeling bad for what he had done, Nick continues on to save Annie. The game continues on as normal until after defeating Red.

Nick, Annie, Dick, and Isabela attempt to start the plane, but it continues to stall. Hundreds of zombies begin surrounding the plane as the screen fades to black. It is then explained that although General Hemlock was arrested, there was never a cure for the zombie disease and rumors of a "Number 12" were never proven. 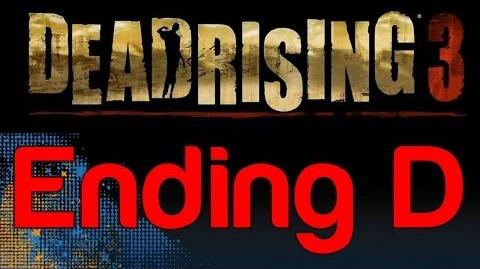 Requirements: Complete chapters 1 - 6 but go to the plane instead of the karaoke bar.

Nick, figuring it's every man for himself, tries to leave everyone to die and escape on the plane. However, Red, Annie, Rhonda, and Gary enter the hanger and knock Nick down.

While Nick tries to convince them that he was joking, they are ashamed of his selfishness and leave him to die. It is then revealed that outbreaks later occurred all across America, as was Hemlock's plan. 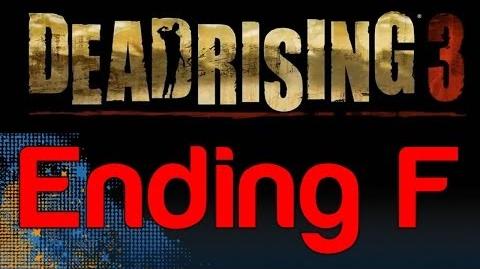 Requirements: Do not finish all chapters by the time the firebomb is scheduled.

If the player does not successfully complete the story, and the clock runs out, a scene of the firebomb explosion will occur, destroying the entire city and all organic life within it.

It is explained that no one in the city was ever heard from again, and General Hemlock successfully created a bio weapon that destroyed the population and put America under martial law.

Requirements: Fail to stop Hemlock from collecting the king zombies in Chapter 8.

Hemlock, after successfully harvesting all of the kings, evacuates the city. It is then bombed, destroying all organic life. It is then explained that Hemlock successfully used the king zombies as a bio weapon, which destroyed the population but left infrastructure intact.

Although technically an ending, receiving this conclusion will simply lead to a game over screen where the player can restart from the last checkpoint, as opposed to the other endings where the game goes to the credits and starting from a previous checkpoint is unavailable.

After Defeating Red, Nick and Annie hug each other. Annie thanks him for saving her, before revealing that she knows of Nick’s wrongdoing. A group of survivors appear: Joey is unarmed, Hank is wielding a Spiked Bat, Kyla has a crowbar, Kent DeMare is armed with a whisky bottle and one additional unused survivor has a lead pipe.

Nick tries to explain that he’s special, which makes the survivors angrily question him. Nick pleads with them that he needs to escape before Annie lets him know that he will be in the “Safehouse In The Sky”. Nick tries to run, but is knocked down and is beaten brutally to death by the survivors before the final deathly blow is stricken to the head by Hank with the Spiked Bat.

This ending likely would've been achieved if Nick killed every survivor.