"Thank you for your kindness, young man."
—Esther Alwin on reaching the safe room.

Esther Alwin is a Dead Rising 2 survivor. She is found in Children's Castle during the mission Short Sighted. She is an elderly woman with poor eyesight who has no idea that a zombie outbreak is happening in Fortune City. She reappears in Dead Rising 2: Off the Record with the same role.

In Dead Rising 2 Esther is found in Children's Castle in the Royal Flush Plaza on the first day, trying to buy a toy for her grandchild. In Dead Rising 2: Off the Record Esther is found on the fourth day. When Chuck Greene/Frank West approaches her, she mistakes him for a store employee and complains about the customer service. Chuck/Frank tells her that there are zombies outside the store, but she misunderstands him, and says that her grandchild is much too young for zombie toys.

Once Chuck/Frank convinces her that the zombies are real, she agrees to follow them to the Safe House, but claims that her bunions keep her from moving too fast, therefore she must be carried.

If Chuck/Frank has the Leadership magazine with him, Esther does not need to be carried.

During Stuart's mutiny, Esther is convinced that Chuck is the man responsible for the outbreak. If Chuck does not stop the mutiny in time, Esther will leave the safe house along with Stuart and several other survivors, never to be seen again.

If Esther survives the events of the game, she is certain to be deceased by the events of Dead Rising 3, as it is unlikely that she would live that long. 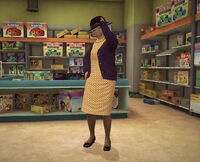 Esther Alwin in a discussion with Chuck.

Esther is carried by Frank West.

Esther is brought back to the shelter. 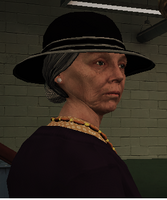 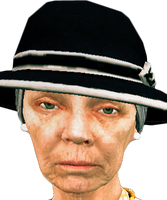 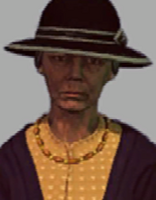