Little brother of Adam MacIntyre. Blames Frank for his brother's death, and combining this with his love of ice cream produced some chilling results.

"How about a little ice cream, Frank?"
—Evan, before attacking Frank

Evan appears on the Platinum Strip between Cases 6.1 and 6.2 in front of the arena, where he has his Clown Car parked.

As Frank walks near a clown car, behind him is a clown named Evan. Evan thinks Frank is a customer who wants ice cream. Frank says he doesn't think he will sell a lot of ice cream "right now" and he will not get in his car. A signed photograph of Frank West blows out of the grasp of the dead TiR Employee and lands in front of Evan. After he remembers Frank was the one who killed his brother, he then points a modified Snowball Cannon at Frank.

After a brief fight, Evan is knocked down to the ground, revealing that he's actually a midget and his legs are stilts. He then gets back up and charges at Frank but misses. He then screams that Frank is going to try all his flavors and attacks again.

After being defeated a second time, Evan stumbles to his car as he grabs his Snowball Cannon but it doesn't work. Frustrated, Evan tries to jump for his Freeze Grenades. After multiple jumps in which Evan continuously bumps into his car, a Freeze Grenade falls and lands on Evan's face. Evan exclaims in pain and says "You... scream... I... scream... We all... scream for... ice cream!" as he turns completely frozen in which Frank kicks him down and he breaks into multiple pieces.

Evan is on stilts, with which he will kick with if Frank gets too close. He also uses a special type of Snowball Cannon. It can freeze Frank and slow him down or stop him in his tracks completely until he wiggles free. He also throws explosive canisters of liquid nitrogen at Frank. When Evan is knocked off his stilts, he attacks Frank with his bare hands. 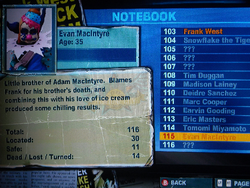 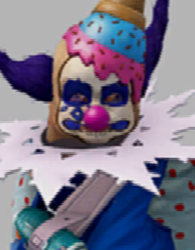 Notebook Portrait in Dead Rising 2: Off the Record

One of the very first images of Evan.

One of the very first images of Evan.

Frank attacking Evan with a slicecycle. 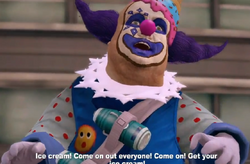 ...used to work at the Willamette Mall?

A photo of Frank appears in front of Evan.

Evan looks at the photo.

Evan tries to use his Snowball Cannon.

Liquid Nitrogen canister on top of the Clown Car.

Frank about to knock Evan's down. 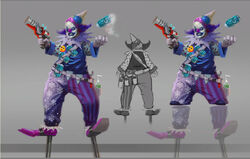 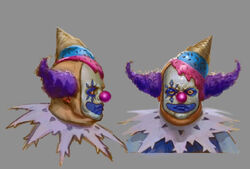 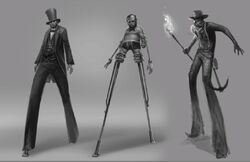 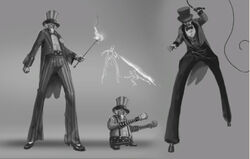 Evan on his stilts.