The Excavator is a weapon in Dead Rising.

It is similar to the chainsaw as a two-handed weapon. When used, Frank stabs it into the nearest enemy. The zombie starts spinning and with that Frank is able to hit other enemies with the zombie that is spinning around on the Excavator's shaft. It is used in construction projects to break through concrete or the ground. It cannot be stored in the inventory.

Its durability is increased with the Engineering book.

The secondary attack can be used to go through crowds of zombies very easily. 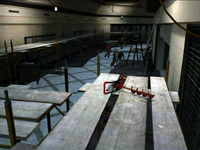 Location of Excavator in North Plaza on the catwalk