The Fire Extinguisher is a weapon in Dead Rising.

It is used in the scoop Long Haired Punk to extinguish Paul after he lights himself on fire.

Spraying it on psychopaths will stun them, as they will break out in a coughing fit. If sprayed on a zombie, it will leave white residue. 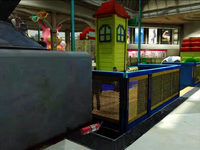 Fire extinguisher outside of Casual Gals in Wonderland Plaza