"These flaming balls spread a fiery death as they bounce from zombie to zombie."
—Combo card description

The Fire Spitter is a combo weapon in Dead Rising 2 and Dead Rising 2: Off the Record. It is created by combining a toy spitball gun with a tiki torch.

It functions similarly to the Flamethrower, only instead of firing a steady stream of fire, it shoots fireballs at a long distance, like the Blazing Aces.

This weapon, along with the Flamethrower, is used by the psychopath Brent Ernst. 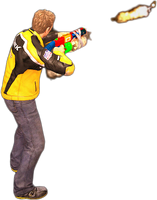 "MascotPaintBall" - with a mod, the player can pick up and hold Slappy's gun he uses during battle - this version of the weapon has a different holding animation.