"Get away from it all and lose yourself in one of our many casinos or try and resist spending all your winnings at one of our fine stores. Fortune City, where the good times never know when to end!"
—Fortune City Map

Fortune City, Nevada is a Las Vegas-themed adult amusement and entertainment resort, complete with casinos and hotels, which serves as the main setting in Dead Rising 2. Not an actual city, the resort was built around 1992. After the city of Las Vegas was destroyed via nuke due to a zombie outbreak three years before, the remains of which are still sealed off by the government, the resort has undergone heavy renovations, possibly to replicate Las Vegas' famous strip, as stated in the Fortune City Tourism Board attraction video.

Fortune City is accessed via a Bascule Bridge, which could mean that the resort is nearby a body of water. The bridge is raised for the majority of the game, and is only lowered for the military when they arrive for cleanup. However, it is raised immediately after their crossing.

Five years after Willamette, and three years after Las Vegas, Fortune City became the site of yet another zombie outbreak. The resort had recently been chosen as the venue for the latest installment of Terror is Reality, a controversial game show that involves the slaughter of the undead. Shortly after midnight, following an episode of Terror is Reality, the zombies were intentionally released from captivity, in what appeared to be an act of terrorism. The zombies spread rapidly, infecting the thousands of visitors and spectators and soon, Fortune City was completely overrun.

Chuck Greene, a contestant on Terror is Reality, was one of the few survivors who made it to the emergency shelter with his daughter; Katey, only to discover he had been falsely accused of causing the outbreak. With only three days before the military arrived for cleanup, Chuck worked with Stacey Forsythe of CURE, and Rebecca Chang of Channel 6 Action News, to stop Terror is Reality's host, TK, from stealing Fortune City banks, and discovered the harsh truth behind the outbreak, and the one in Las Vegas, where Chuck had lost his wife. Phenotrans, the developers of Zombrex, were responsible, with their reason being to continue the production of the highly profitable drug.

When the military cleanup failed after facing a stronger form of zombie, Fortune City was scheduled to follow the same fate as Las Vegas, a government issued firebomb would destroy the city in an effort to contain the zombie parasite. After the supervisor of the emergency shelter revealed himself to be in league with Phenotrans, he executed Rebecca and made a getaway. Chuck managed to stop him and halt the firebombing.

Chuck returns to the Safe House to find everyone has been evacuated, but Katey and Stacey were missing. He is left behind while the last helicopter leaves Fortune City. Later, TK calls Chuck by the transceiver, telling him he kidnapped the girls, and tasks Chuck to get some items around the city. Chuck does that and goes to the arena, where TK knocks him and ties him up along with Stacey and Katey. Chuck manages to get free, and engages in a fight with TK. Chuck throws TK off the platform and rescues the girls.

They then make to the Safe House to be evacuated. Chuck is about to board when he realizes Katey's backpack was dropped. He goes to retrieve it when a zombified TK emerges from the elevator and attacks him. He shouts for the helicopter to leave and that he will be alright. Moments later, Frank West arrives by helicopter and saves him. Frank recognizes Chuck as the responsible for the outbreak. Chuck explains him that Phenotrans set him up, so both men leave Fortune City to visit a Phenotrans facility nearby to find some evidence to clear Chuck's name. The fate of Fortune City afterwards is unknown, though it's heavily implied that it was bombed to contain the zombie outbreak.

The resort is divided up into several major areas, consisting of hotels, casinos and plazas:

For all contents of stores, see Dead Rising 2 Stores.

Dead Rising 2 Stores and Fortune City/Common Areas together have the contents of all items in all of Fortune City. 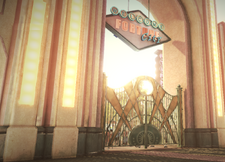 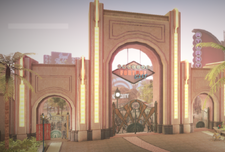 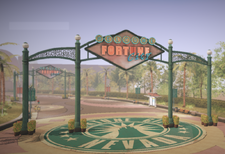 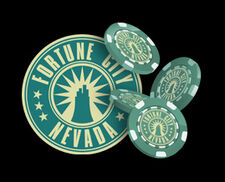 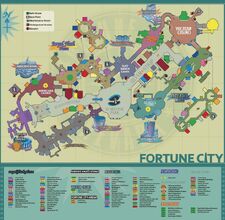 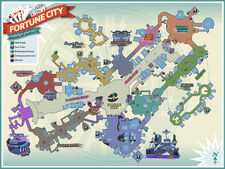 Fortune City Logo
Add a photo to this gallery

Retrieved from "https://deadrising.fandom.com/wiki/Fortune_City?oldid=385549"
Community content is available under CC-BY-SA unless otherwise noted.