"When you need another set of eyes and guns, Freedom Bear gets the job done."
—Combo card description

The Freedom Bear is a combo weapon in Dead Rising 2 and Dead Rising 2: Off the Record. It is created by combining a robot bear with an LMG.[1]

The combination of the two weapons results in a turret-like weapon. When the player sets the Freedom Bear down on the ground, the toy will come to life, shooting at any and all zombies around it. It is best used in congested areas.

"He may look like a cute and cuddly bear, but he is actually an automatic sentry gun. Plop him down and he will be your buddy, protecting the area and looking adorable."[2]

In Dead Rising 2 and Off the Record, the combo card for the Freedom Bear is unlocked by examining the movie poster in front of the men's restroom in the Yucatan Casino. It is a poster with a man wearing a bear suit and carrying a machine gun. 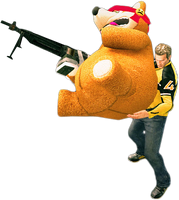 Attempting to throw the bear does nothing 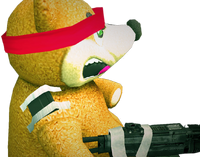