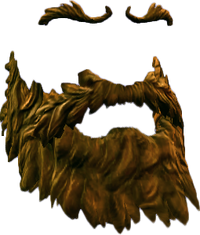 The Full Beard Moustache is clothing found in Dead Rising 2.

The full beard moustache is available in the Wave of Style store in Royal Flush Plaza mall, located on the ground floor.

The Full Beard Moustache is one of four items for the Knight set of clothing, which when combined with the 3 other items, will give Chuck a secondary health bar which, when depleted, breaks the armor and leaves Chuck in his boxers.

In addition, objects thrown by chuck such as spears, lances and knives will travel much further.[Verification needed]

All the parts of the armor will stay in a locker in the Safe House restroom. Chuck can equip and unequip it at any time.

The Knight Armor is the only clothing with secondary effects that isn't a Skill Pack.

Retrieved from "https://deadrising.fandom.com/wiki/Full_Beard_Moustache?oldid=383744"
Community content is available under CC-BY-SA unless otherwise noted.