"What happened to the zombies out there? They went... berserk."
—Stacey

Gas zombies are a type of zombie appearing in Dead Rising 2, Dead Rising 2: Case West, and Dead Rising 2: Off the Record. They are much stronger than regular zombies, are much quicker, and can spew blood on their targets, stunning them for a short time. Their escape commands are also a bit longer and more unforgiving than normal zombies.

Gas zombies are zombies that have mutated from the gas unleashed upon Fortune City by Phenotrans, granting them increased speed and strength over regular zombies, and the ability to project blood at their enemies.

It is unknown how the gas strengthens the zombies, but it most likely causes some kind of chemical reaction with the queens inside a zombie's body, causing mutation. It was invented to mature queens at a faster rate for harvest, due to the large quantity required to make Zombrex.

It is currently impossible for zombies to become gas zombies on their own, and the gas required is not natural, thus the only way gas zombies can be created at this time is through human intervention.

They are first seen when Sergeant Dwight Boykin arrives with his unit. A vent is leaking green gas, and one of the zombies happens to stand over it. The AZU soldier is at first not intimidated by the zombie, but then it mutates and becomes much more powerful, able to withstand several shots. The zombies surrounding the vent quickly turn into gas zombies, and then proceed to kill the surrounding soldiers, except for Dwight.

Once spotted, gas zombies will pursue Chuck faster than normal zombies, and will only break pursuit when he leaves the area. This results in Chuck being pursued by a dozen or more gas zombies as he moves through an area. Often, they will spew blood at Chuck before attacking him, which will cause him to pause and violently cough for several seconds - more than enough time for him to be surrounded. Their swipe attack is also somewhat faster and stronger compared to normal zombies, typically dealing about a block of health. Their escape commands are much more demanding and can be easy to fail at first, leaving unfamiliar players to suffer.

Gas zombies also have a better chance to be housing a queen than normal zombies. However, one that does and one that doesn't have no difference until death. After death, one's body will typically shake violently similar to a seizure until its head explodes, releasing a queen. Unlike regular queens, the ones rewarded for killing gas zombies will quickly move towards the nearest floor vent. If they reach this spot, they will disappear in a puff of smoke. If you need the queen, be sure to catch it in time. 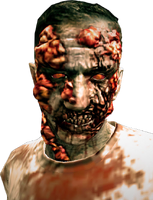 Add a photo to this gallery
Retrieved from "https://deadrising.fandom.com/wiki/Gas_Zombie?oldid=393656"
Community content is available under CC-BY-SA unless otherwise noted.