"That's exactly why I'm drinkin'! You expect me to stay sober in this situation? Asshole!"
—Gil, on speaking to Frank
"Consider my buzz officially killed. Now I've gotta start gettin' my drink on all over again."
—Gil, upon reaching the Security Room

Gil Jimenez is a survivor appearing in Dead Rising and Dead Rising: Chop Till You Drop.

He is found in Chris' Fine Foods in the Food Court during the unmarked scoop The Drunkard. He is dealing with the stress of the zombie outbreak by drinking.

Gil is drinking wine in Chris' Fine Foods in the Food Court when Frank finds him. Frank offers to bring him to the Security Room, promising that a helicopter is here to rescue them.

Gil babbles back in a drunken state, but clears up when Frank tries to leave him. He agrees to follow Frank back, but due to his inebriation, Frank has to offer him a shoulder to help him walk.

After being rescued, he will wait in the room with the green door. When Kindell Johnson believes that there is no helicopter coming in three days, he rallies up the other survivors in the same room, including Gil, to make a break for it. If Frank does not stop Kindell's mutiny, Gil will leave the Security Room along with the other survivors. They will no longer count towards the number of rescued survivors. 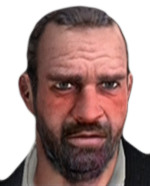 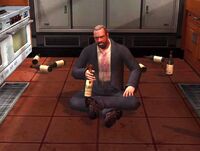 Gil is sitting around a lot of wine bottles 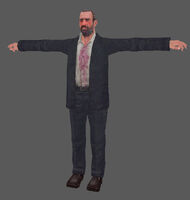