Happily Ever After... Sort Of

Gordon Terence Dawkins[1] is a survivor appearing in Dead Rising 2. He is found in Casual Gals being attacked by zombies in the Royal Flush Plaza during the mission Happily Ever After... Sort Of. He reappears in Dead Rising 2: Off the Record with the same role.

Happily Ever After Sort Of[]

In the mission Happily Ever After... Sort Of Gordon has abandoned his wife LaShawndra and fled for refuge. He can be found hiding behind the counter in Casual Gals in the Royal Flush Plaza, idling as ravenous zombies close in on the store. He scolds himself for leaving his wife LaShawndra Dawkins to the zombies in The Dark Bean. Once reunited with his wife, they will make up. Sometimes Gordon will receive a punch on the arm from her. They then head to the Safe House with Chuck Greene.

If LaShawndra is killed, Gordon will immediately defect.

Gordon is one of the crazed survivors Frank can fight in Sandbox Mode. As soon as Frank enters the alley next to Hot Excitorama, Gordon will attack with a lead pipe. Once defeated he drops his weapon and $10,000. Then he will spawn on fourth day in the same location with the same items he had before. 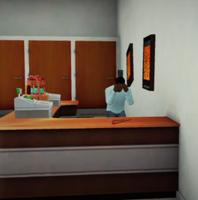 Gordon is crying behind the counter in Casual Gals. 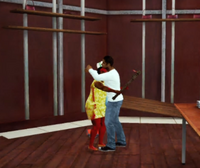 Gordon is brought back to the shelter. 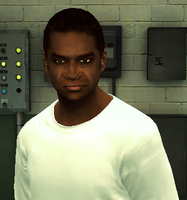 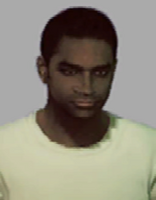