Was held captive by Adam.

Greg Simpson is a survivor appearing in Dead Rising and Dead Rising: Chop Till You Drop.

He is a Willamette Patrol employee held hostage by Adam MacIntyre, and is trapped on the Space Rider during the scoop Out of Control.

Out of Control[edit | edit source]

Main article: Out of Control

After Frank defeats the psychopathic clown Adam MacIntyre, he stops the Space Rider using the control panel. Greg, who has been held hostage by Adam, then steps off the ride in a dizzy state. Frank offers to take him to some other survivors in the Security Room, and Greg reveals that he knows a shortcut there.

He then leads Frank to the women's bathroom in Wonderland Plaza, and tells him that a vent in the ceiling will bring him to Paradise Plaza. Once Frank and Greg are in the bathroom, jump up onto the sink and go over to the left-hand side to find the shortcut entrance, which will take you to the women's bathrooms in Paradise Plaza. After Frank and Greg travel through the vent, he follows Frank to the Security Room and cheers when seeing Otis safe and sound.

In Chop Till You Drop, talking to Greg will open a shortcut to Cletus' gun shop.

In Infinity Mode, Greg appears in the Security Room from 2:00:00 to 2:07:00 and is armed with a Push Broom Handle. In his equipment he carries a Grapefruit, a Nightstick, a Lipstick Prop, a Perfume Prop, and a Paint Can.

Greg gets off the Space Rider. 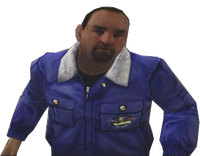 Otis and Greg in the Security Room.

Willamette Patrol logo on his jacket.

Greg Simpson as a zombie, note the hunk of meat in his hand. 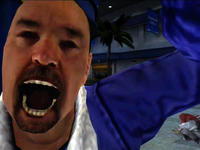 Any survivor killed by a zombie can come back as a zombie. 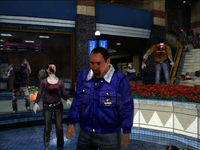 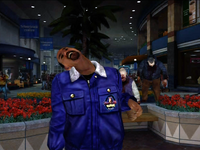 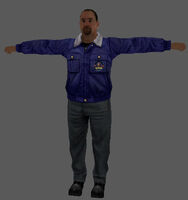 Add a photo to this gallery
Retrieved from "https://deadrising.fandom.com/wiki/Greg_Simpson?oldid=399442"
Community content is available under CC-BY-SA unless otherwise noted.