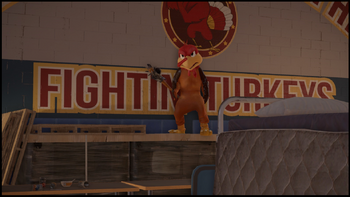 The Grim Gobbler is a Maniac in Dead Rising 4. He's a deranged high school sports mascot in a turkey costume.

Frank encounters him when he goes to investigate the Willamette Junior High School, and stumbles upon him holding a sort of rally with several football players. The Grim Gobbler notices Frank, and sicks his followers on him. He fights with an Equalizer. After he is killed, he will drop a Football Bomb.

Retrieved from "https://deadrising.fandom.com/wiki/Grim_Gobbler?oldid=395330"
Community content is available under CC-BY-SA unless otherwise noted.