"Some people are holed up in the North Plaza gun shop. They've taken over Cletus' store!"
—Otis Washington, Chop Till You Drop

The scoop place in Huntin' Shack in North Plaza in the early morning of the third day.

It involves three heavily armed survivors, Jonathan Picardsen, Brett Styles, and Alyssa Laurent, who have taken over the gun store. 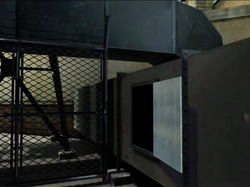 Three survivors, Brett Styles, Alyssa Laurent, and Jonathan Picardsen, have taken over Huntin' Shack. As Frank West first enters the store, all three survivors found inside fire at Frank West. Turn around and go back out, and they will realize you're human. Jonathan will come to the door to see if Frank is alright - talk to him.

This prompts them to notice that he is not a zombie. Jonathan goes up to Frank and asks him what he wants with them. Frank reveals that a helicopter is arriving to rescue them, and they should follow him back to the Security Room. However, the survivors do not believe Frank and demands a photo of the vent.

If Frank has taken a photograph of the rooftop air duct into the Security Room, the three gun-toting survivors agree to follow Frank and take refuge in the Security Room. If Jonathan Picardsen is still talking to Frank, and has not agreed to join yet, and Frank starts to walk towards Alyssa and Brett behind the counter, the three of them will resume firing. Brett will also hit Jonathan in the crossfire.

Also, watch out for friendly fire from these three. If Frank is standing between them and a nearby zombie, he will be shot.

There are a few differences when the scoop is completed in Chop Till You Drop.

Frank tells Jonathan about the helicopter.

He tells them about the duct...

...but they require photographic proof.
Add a photo to this gallery

Retrieved from "https://deadrising.fandom.com/wiki/Gun_Shop_Standoff?oldid=388772"
Community content is available under CC-BY-SA unless otherwise noted.