"There's a couple hangin' from the rabbit in Wonderland Plaza! If you don't hurry they're gonna become zombie food!"
—Otis Washington, Chop Till You Drop

It takes place in Wonderland Plaza in the afternoon of the second day. It involves Nick Evans and Sally Mills, who are dangling from a giant inflatable rabbit in an attempt to get away from the attacking zombies below.

Frank arrives in Wonderland Plaza in the afternoon of the second day to find two survivors, Nick Evans and a Sally Mills desperately clinging onto the paws of an enormous inflatable Willamette bunny in between the Lovely Fashion House and Estelle's Fine-lady Cosmetics. They begin to yell for help as Frank approaches. A huge zombie horde has gathered below them. To save the survivors, Frank should kill all of the zombies in between the fence and the rabbit, then throw a fairly weak object at the survivors to make them fall, such as the hunk of meat among the newly killed zombies. Once they fall a brief conversation will ensue, and they will join Frank.

Further information: Hanging by a Thread/Gallery 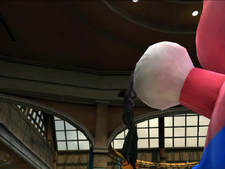 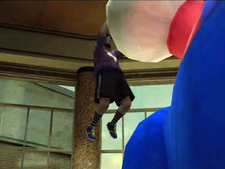 Nick Evans.
Add a photo to this gallery

Retrieved from "https://deadrising.fandom.com/wiki/Hanging_by_a_Thread?oldid=355839"
Community content is available under CC-BY-SA unless otherwise noted.