"Take that guy out!"
—Hazard Units

Hazard Units are psychopaths appearing in Dead Rising 2: Case West, serving as sub-bosses. These are Security Guards in heavily armed suits with Impact Hammers. After fighting the Hazard Units for the first time, more are stationed throughout the Phenotrans Facility.

In Case 2-2: Infiltration, as Chuck and Frank investigate the Director's Office for evidence to clear Chuck's name back in Fortune City, they discover that Zombrex is not synthetic, and that Phenotrans have been using the homeless, prisoners, and missing persons as test subjects for manufacturing Zombrex. This discovery upsets Frank, who throws a box of Zombrex that triggers an alarm. Two Hazard Units enter the office and proceed to attack Frank and Chuck. After defeat, one of the guards are called via radio, asking what their status was. Frank, posing as the Hazard Unit, informs that it was an alarm malfunction and that everything was ok. 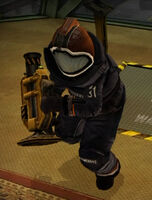 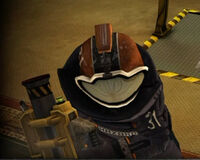 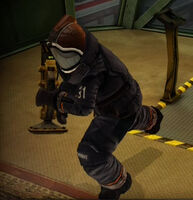 Concept art.
Add a photo to this gallery

Retrieved from "https://deadrising.fandom.com/wiki/Hazard_Units?oldid=390628"
Community content is available under CC-BY-SA unless otherwise noted.