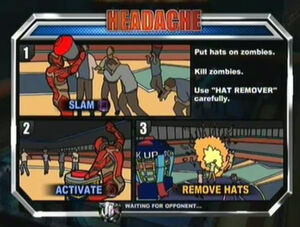 Headache is a multiplayer mode game for Terror is Reality in Dead Rising 2. Players rush to slap special hats atop the heads of the surrounding undead.

After placing a number of hats, players must rush to hit a “Trigger” button, causing their hats to activate and grind up those undead heads for points.

The hats are located at the central “pick-up” station, and the Trigger buttons (there are two of them) are found at either end of the arena. Grab your hats at the start of the event, then run around and start placing them onto zombies.

Each hat you place is worth points. Slap on those hats in quick succession to gain a vital score multiplier.

After placing all of your hats, run to the nearest Trigger button and hit it to slaughter your zombies, scoring big points. Or wait to press the button in favor of grabbing more hats and placing even more of them onto zombies. The more hats you’re able to set off at once, the bigger the score multiplier when you hit that button.

The more blenders are on zombies the more points you get. Players can sabotage their opponents by blowing their buckets up with explosives before they are activated. The player with the most points at the end of the round is the winner.

All players begin with a stick of dynamite, which they may use at any time to wipe out a cluster of zombies.

If you see a lot of hat-wearing zombies that aren’t “yours,” toss your dynamite into the crowd, or run up and shove it into the mouth of a hatless zombie for an even more precise detonation. Obliterating the other player's hat-wearing zombies with dynamite prevents them from scoring points.

You can carry only one stick of dynamite at a time. If you are out of dynamite, you will automatically grab another stick when you go back to the center for more hats.

Don’t risk waiting too long to hit that Trigger button or your opponents will destroy your hat wearing zombies.[1]

Retrieved from "https://deadrising.fandom.com/wiki/Headache?oldid=353703"
Community content is available under CC-BY-SA unless otherwise noted.