"This place sucks...It's dirty...It's cramped...is not there a shower around here?"
—Heather, on the Security Room

Heather Tompkins is a survivor appearing in Dead Rising and Dead Rising: Chop Till You Drop.

She is found in Child's Play in Paradise Plaza during the unmarked scoop Twin Sisters. She is crying hysterically inside the store after abandoning her twin sister.

Heather is found hiding in a toy store in Paradise Plaza while her sister Pamela is being attacked by a horde of zombies in the moat. When Frank approaches her, she pleads for help, saying that she had no choice but to leave her sister behind or they would have both been dead.

Frank then offers to take her to the Security Room.

After being rescued, she will wait in the room with the blue door. When Ronald Shiner complains about the lack of food, he rallies up the other survivors in the same room, including Heather, to head out and look for food.

If Frank does not stop Ronald's mutiny, Heather will leave the Security Room along with the other survivors in the same room. They will no longer count towards the number of rescued survivors.

In Inifnity Mode, Heather appears at the lobby of Colby's Movieland from 4:07:00 to 4:19:00 and is armed with Baseball Bat. In her equipment she carries a Bowling Ball, a Mailbox, an Acoustic Guitar, a Baseball Bat and a Baguette. 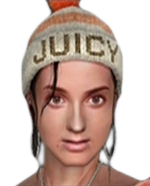 "I had to abandon my sister!" 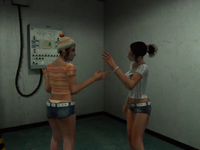 Pamela and Heather arguing in the Security Room. 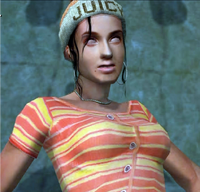 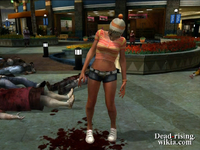 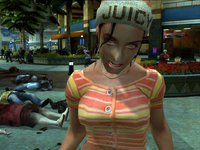 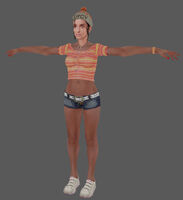