The Heliport, often referred to as the helipad, is the first mall location Frank is able to explore in Dead Rising after Frank West jumps from Ed DeLuca's besieged helicopter.

Frank is dropped off here by Ed DeLuca after their helicopter is attacked by the Special Forces when they approach the mall. The two make an arrangement that Ed will pickup Frank at noon on September 22. Frank then meets a mysterious individual named Carlito who asks him if he came by helicopter and makes strange remarks about the "riot" ongoing in the streets and how it's so quiet that it's as if "everyone is already dead". The heliport plays no important role until September 22 at noon, when Frank needs to be on the helipad for the "A" 72 Hour Mode ending, which leads to 24 hours more of gameplay (overtime).

If certain events are played out, Frank will witness Ed's helicopter crash and he will slump to his knees, giving up all hope, with stray zombies wandering on the heliport. Before a zombie can bite Frank, Isabela shoots it, saving his life, marking the beginning of Overtime Mode.

To finish 72 Hour Mode with Ending "A" Frank must be at the heliport at the end of 72 Hour Mode, by noon on September 22nd. Make sure Frank stands on the helipad itself, on the yellow "H", just to play it safe. Now Frank needs to patiently wait until 12:00 Noon.[1][2] 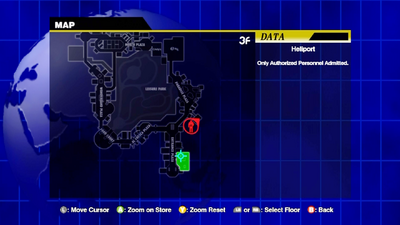 Frank slumps to his knees.

Frank gets a better view of the parking lot.

Frank waits on the heliport.