The Hockey Stick is a weapon in Dead Rising.

It can be used while the player positions themselves behind a wall with the head of the stick outside facing enemies, and shoot out of cover without revealing themselves. This is one of two weapons capable of doing this, the other being the Golf Club.

This tactic is useful for the second Carlito fight in Case 2-2: Rescue the Professor. Just position Frank behind a support beam so you can see him, then shoot pucks at him.

A headshot will instantly kill any zombie. 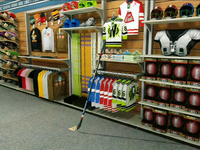 Hockey Stick in Shootingstar Sporting Goods.
Add a photo to this gallery

Retrieved from "https://deadrising.fandom.com/wiki/Hockey_Stick_(Dead_Rising)?oldid=390574"
Community content is available under CC-BY-SA unless otherwise noted.