"Illegally infected persons have often been spotted at the low-rent Ingleton Motel. An area of sanctuary is likely to be found there. If any zombies are in evidence, once they are removed this area should remain zombie free until help arrives"
—Smartglass Description

The Ingleton Motel is a location in Dead Rising 3.

It is an abandoned hotel that is now being used as a hideout for illegals. An illegal named Anna Hong can be found here during the side mission Signs of Safety in Chapter 0, tagging the hotel as an illegal safe area using the group's symbol.

After finishing Signs of Safety, the second floor becomes available to use as a safe house. If Nick fails, ignores or doesn't complete the mission, it will remain locked.

The blueprint for the pole weapon, a ZDC update and the Lone Blade book can be find inside the motel once it's unlocked as a safe house.[1] The weapon locker and survivor bulletin board also become available to use. It is most likely the first permanent safe house that the player will unlock. The first floor of the hotel is not accessible. A Frank Statue can be found on the balcony of the second floor.

In Dead Rising 3: Operation Broken Eagle, the motel is the first safe house that's been "cleared" out by commander Adam Kane. Using larvae, he infects all of the illegals in the safe house, killing them.

In Dead Rising 3: Fallen Angel, a group of illegals (Bob, Alex and Devon) are facing military execution. Angel can stop their execution as part of the Rescue Survivors side mission.

There is a ZDC Poster to burn on a wall on ground level.

Anna in Signs of Safety 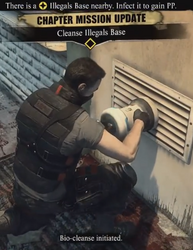 Adam Kane cleansing the safe house.
Add a photo to this gallery

Retrieved from "https://deadrising.fandom.com/wiki/Ingleton_Motel?oldid=396367"
Community content is available under CC-BY-SA unless otherwise noted.