Welcome to the Family

"I wish I never left home."
—Jack Ellis, after reaching the Safe House

Jack Ellis is a survivor in Dead Rising 2 during the mission Welcome to the Family. He also may challenge Chuck to poker in Ante Up. He reappears in Dead Rising 2: Off the Record with the same role.

Welcome to the Family[]

In Welcome to the Family Chuck finds a large man named Jack Ellis and his father-in-law, Kenneth, holed up in Shanks. Jack recently got married to Kenneth's daughter, Kazmina and was spending time with Kenneth in Fortune City to become better acquaintanced when the zombie outbreak occurred. Jack is cowering in the corner of the weapons store while his father-in-law fights off the zombies with a knife. Chuck is able to convince Jack that he is not safe, and he should follow him to the Safe House.

After being escorted back to the Safe House, Jack and two other survivors may challenge Chuck to a game of strip poker in the mission Ante Up. Beating Jack in Ante up will reward Chuck with his helmet, which is a part of the Knight Armor. The helmet will remain permanently in Chuck's locker.

Jack is one of the crazed survivors Frank can fight in Sandbox Mode. He will spawn in the Arena. Once defeated he drops his weapon, $10,000, and his Protoman Helmet. Defeating him in Sandbox Mode is a faster, easier way to attain the helmet.

Jack is brought back to the shelter. 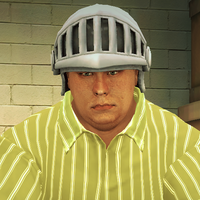 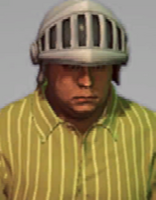