"Look mister, if we're gonna fight these zombies, we need GUNS!"
—James, on sharing with Cletus.

James Ramsey is a victim in Dead Rising and Dead Rising: Chop Till You Drop.

He was found in the Huntin' Shack in the North Plaza during the unmarked scoop The Gun Shop. He was shot and killed by Cletus Samson before reanimating into a zombie.

James was attempting to convince the owner of Huntin' Shack, Cletus Samson, to lend them some guns to fight the zombies. Cletus refused to do so on the grounds that he couldn't trust them. James cautiously approached Cletus, believing that he could handle the situation, only to be shot square in the chest by Cletus.

After Cletus was defeated by Frank, he panicked and ran out of the store, only to be attacked and killed by a zombified James. 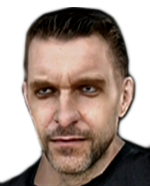 James trying to reason with Cletus. 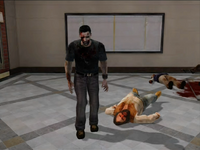 Zombie James and the deceased Cletus. 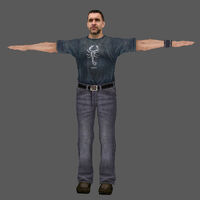 Model of James Ramsey.
Add a photo to this gallery

Retrieved from "https://deadrising.fandom.com/wiki/James_Ramsey?oldid=397101"
Community content is available under CC-BY-SA unless otherwise noted.