"My man has a gun, me and my cash need some protection. are you sure you know how to use that thing?"
—Janus, when Chuck/Frank obtains or has a gun in their inventory

Janus Razo is a survivor in Dead Rising 2. He is found outside the Atlantica Casino looking for an armed escort to take him to safety during the unannounced mission Big Game Stakes. He reappears in Dead Rising 2: Off the Record with the same role, though he cannot be found until 4am on the third day and he is located in the Food Court.

In Dead Rising 2, Janus is found waiting outside of the Atlantica Casino on the evening of the second day, having collected a large amount of cash from inside the casino. In Dead Rising 2: Off the Record, Janus is found on top of the information desk in the Food Court (Dead Rising 2). Once approached by Chuck/Frank, he will ask for an armed escort to a safe refuge. Chuck/Frank offers to take Janus to the emergency shelter, but Janus refuses unless Chuck/Frank is carrying a gun in order to 'effectively protect' Janus and his briefcase of cash.

After he is safely brought to the shelter, Janus will award Chuck/Frank some money and then await rescue with the other survivors. In Dead Rising 2, he will give Chuck $70,000. In Off the Record, he will reward Frank with $20,000 but his money case will contain more money when killed making it more tempting to kill him instead of rescuing him.

Janus is one of the crazed survivors Frank can fight in Sandbox Mode. He will spawn in the Royal Flush Plaza next to the Sports Car with a crowbar. Once defeated he drops his weapon and $10,000. 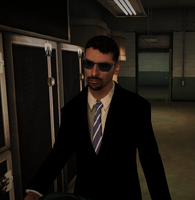 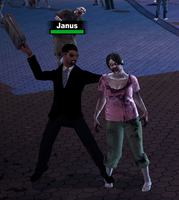 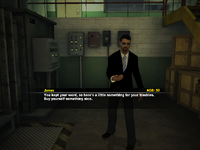 You kept your word, so here's a little something for your troubles. Buy yourself something nice. 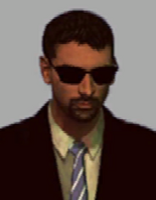