A cheerful bartender. Found above the Hamburger Fiefdom.

Jasper Sanford is a survivor in Dead Rising 2 mission Tastes Like Chicken. He is found hiding above Hamburger Fiefdom in the Food Court. He reappears in Dead Rising 2: Off the Record with the same role.

Before the zombie outbreak in Fortune City, Jasper worked at the Shoal Nightclub as a bartender. During the outbreak, he found a way on top of Hamburger Fiefdom and hid there with a co-worker, Cinda Smith. However, their supplies soon ran low and Cinda decided to search for more food.

To rescue Jasper, Chuck needs to climb atop the snack machines between the Yucatan Casino entrance and Lombardi's. Travel along the walkway to roof of Hamburger Fiefdom. When Chuck Greene finds Jasper, he tells him that Cinda went to find more food at Cucina Donnacci and agrees to accompany him to search for her.

After they find Cinda and rescue her from the psychopath Antoine Thomas, she recognizes Chuck as the alleged perpetrator of the zombie outbreak, and refuses to follow him to the Safe House. She asks for Jasper, as he is the only person she trusts. Jasper manages to persuade her to come along.

Jasper is one of the crazed survivors Frank can fight in Sandbox Mode. He will spawn in Yucatan Casino with a baseball bat. Once defeated he drops his weapon and $10,000.

Jasper: Man, I really need a stiff drink. Something to help me forget all this crap. 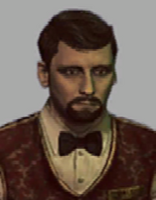