Killer pipes. Found at the stage in the Silver Strip.

Jeanna Slick is the lead singer for the band Angel Lust in Dead Rising 2. She is seen performing at the Silver Strip in front of a huge crowd of zombies, during the mission Rock Heroes. She reappears in Dead Rising 2: Off the Record with the same role.

Jeanna and her band mates, Floyd Stone and Allen Ash, are seen performing a concert to a crowd of zombies that have congregated below the stage in the Silver She and her friends believe those in the crowd are actually fans until Chuck makes them realize zombies have overrun the city. After finishing their song with a mighty chord, the zombies are all killed due to the sound waves and then the band mates agree to be escorted. 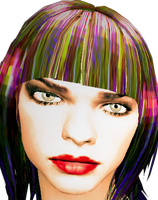 Jeanna and her band mates.

Jeanna: They may have been dead, but no one has been so into our performance before.

Jeanna rewards Frank in Off the Record. 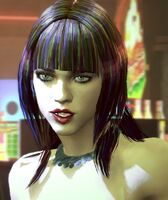 Jeanna with Lulu and Deidre in a Dead Rising 2: Off the Record trailer. 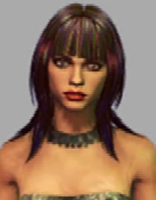