"I'll never get myself caught up in something like that again!"
—Jennifer, upon reaching the Security Room and on the Cult's ways

Jennifer Gorman is a survivor appearing in Dead Rising and Dead Rising: Chop Till You Drop.

She is found held captive by the True Eye cult in Paradise Plaza during the unmarked scoop The Cult. Frank must save her from being sacrificed by the cult.

Jennifer is found outside of Jill's Sandwiches in the Paradise Plaza. She is forced into a wooden crate by members of the True Eye cult. Sean Keanan prepares to sacrifice her by impaling the crate with a Ceremonial Sword, but then notices Frank nearby. He declares Frank a heretic and orders the cultists to attack him. Upon defeating the cult members, Frank frees Jennifer and takes her to the Security Room.

If Frank is captured by the cult, Jennifer may be difficult to save.

After being rescued, she will wait in the room with the green door. When Kindell Johnson believes that there is no helicopter coming in three days, he rallies up the other survivors in the same room, including Jennifer, to make a break for it. If Frank does not stop Kindell's mutiny, Jennifer will leave the Security Room along with the other survivors in the same room. They will no longer count towards the number of rescued survivors.

In Infinity Mode, Jennifer appears in Entrance Plaza in front of a bee clock on the second floor from 7:00:00 to 7:07:00 and is armed with Battle Axe. In her equipment she carries a Skateboard, a Propane Tank, a Sword, a Hanger, and an Orange Juice. 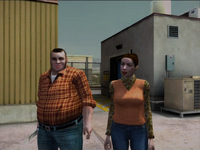 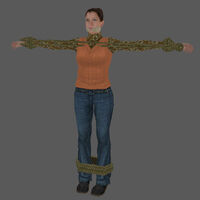