Jeremiah Eckland is a victim appearing in Dead Rising 2. He was caught up in the zombie outbreak in Fortune City and killed. He reappears in Dead Rising 2: Off the Record with the same role.

In the Introduction Jeremiah was a spectator who attended the Terror is Reality show at the Fortune City Arena. When the zombies broke out and started killing everyone in the Arena, he attempted to escape, but was killed in the lobby near Pat Berkson before he could flee.

As Frank works his way into the lobby of the Arena during the outbreak, he finds Jeremiah running from the stadium hallway where he trips and falls onto the ground, before being killed. This moment provides Frank with a Special photo opportunity. 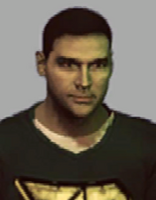