Found holed up in a gun shop.

"You've got some real balls, man. You got some business with us?"
—Jonathan, on Frank's arrival
"This place looks like it's seen better days."
—Jonathan, upon reaching Security Room

Jonathan Picardsen is a survivor appearing in Dead Rising and Dead Rising: Chop Till You Drop.

He is found in Huntin' Shack in North Plaza during the unmarked scoop Gun Shop Standoff. He has occupied the gun store with Alyssa Laurent and Brett Styles.

The three are initially very distrustful of Frank.

Jonathan has occupied the gun store in North Plaza with two other survivors, Alyssa Laurent and Brett Styles. When Frank approaches, they mistake him for a zombie and open fire until he exits the store.

Once they realize their mistake, Jonathan goes over to ask Frank what he wants with them. Frank offers to take them to the Security Room and promises that a helicopter is coming to rescue them. Jonathan is doubtful as he has seen that the door to the Security Room has been welded shut. Brett then requests Frank to provide some proof by bringing them a picture of the duct.

Once Frank shows them the required photo, the three survivors agree to follow him.

In the case they remain in the gun store, their bodies are found behind the counter after the Special forces arrive most likely meaning they were killed by the Special Forces soldiers

In Infinity Mode Jonathan appears in Theater 5 at Colby's Movieland from 2:19:00 to 3:00:00 and is armed with a Machinegun. In his equipment he carries a Bass Guitar, a Nightstick, a Dumbbell, a Katana and a Milk. 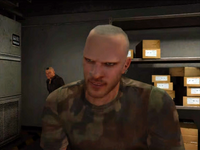 Jonathan Picardsen in the Security Room. 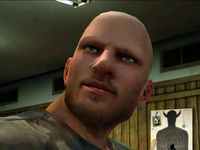 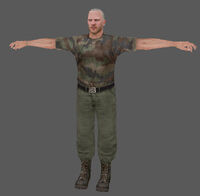