Juan is a survivor appearing in Dead Rising 2 during the mission One Hit Wonder. He is captured by Bibi Love and is forced to be her captive audience by being wired to a bomb, along with Cameron and Allison. He reappears in Dead Rising 2: Off the Record with the same role.

Juan Lee was once Bibi Love's fashion designer before the outbreak as she performed shows in the Slot Ranch Casino. Once the outbreak took the lives of thousands at the Fortune City resort, Bibi snapped and took her staff hostage. She tied them up and set explosives near them, threatening to kill them if her show did not go on as planned. Once Chuck Greene helps Bibi perform her show, she releases Juan and the others, allowing Chuck to escort him to the emergency shelter.

Juan: Look for all that whining about equal rights, I don't see why she can't get her own damn drink!
Juan: Totally missing out on all the action!
Juan: Yeah, well, I better get some action from her later for all that shit I put up with.
Juan: Oh man, sounds like something totally awesome is happening!
Juan: Dude, Dude, you're breaking up!
Juan: Hey, hello? Hey yo still there?
Juan: AGHHHH! 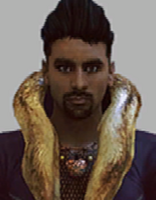