Was captured and held by Jo.

"That bitch! I hope her fat ass rots in hell!"
—Kay, on Jo's Death
"That sadistic bitch! Just thinking about her sends chills up my spine."
—Kay, upon reaching the Security Room

Kay Nelson is a survivor appearing only in Dead Rising.

She is found in Lovely Fashion House in Wonderland Plaza during the scoop Above the Law. She is one of four women being held captive and being tortured by Jo Slade.

She can only be saved after Jo's defeat.

Kay is seen entering a women's clothing store with a cop. Frank arrives to find Kay tied to a chair. She is being verbally abused by the police officer, Jo. Kay pleads for Frank to help her. He tries to intervene as Jo begins to torture Kay with her nightstick, but Jo demands him not to interfere with "official police business", prompting her to attack.

After Jo is defeated, Frank frees Kay and the three other hostages. He then takes the four ladies to the Security Room. 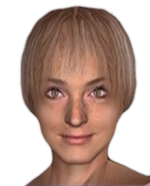 "Looks like you lured another man in here, you little whore"

Kay is tied up. 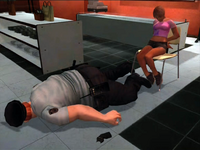 The nightmare is over for Kay. 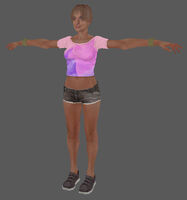 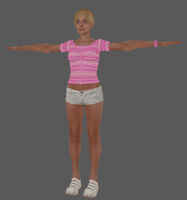 ...looks similar to the female motorist.