Was captured and held by Jo.

"Thanks! What a relief!"
—Kelly, freed from captivity.
"It's crazy, isn't it? All of it. I can't believe I'm even alive."
—Kelly, upon reaching the Security Room and on the zombie disaster

Kelly Carpenter is a survivor appearing exclusively in Dead Rising.

She is found in the Lovely Fashion House in Wonderland Plaza during the scoop Above the Law. She is one of the female victims being held captive by Jo Slade.

Kelly is captured by the corrupt police officer, Jo Slade, and is handcuffed to a table in Lovely Fashion House.

Note: It is possible for Kelly to already be dead when Frank reaches the Lovely Fashion House if Frank took too long to get to the scoop.

In Infinity Mode, Kelly appears in the Ye Olde Toybox at Paradise Plaza from 6:19:00 to 7:00:00, and is armed with a bass guitar. She also carries a Servbot Mask, a Water Gun, a Bucket, Gems, and package of Ice Pops. 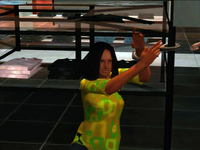 The nightmare is over for Kelly. 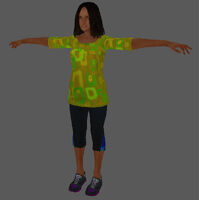