Edit
watch 02:17
New Pokemon Games - The Loop
Do you like this video?
Play Sound

Time for a Hero

"I'm the one that's been training years in my mom's basement for this shit. ME! I'm the one. Just watch me. Anything you can do, I can do it better!"
—Kenny, before he fights Nick.

Kenny "Kick" Dermot is a survivor and psychopath in Dead Rising 3. He is one of seven psychopaths who embody the Seven Deadly Sins. Kenny's sin is Envy.[1]

While unassuming in appearance, Kenny has clinical signs of mania and aggression masked by his overwhelming desire for approval. His feelings of inadequacy and his inferiority complex cause him to imitate those he deems admirable, but these feelings can easily turn to hate. Kenny is provoked by reminders of his vulnerability, such as his tendency to be a copycat.[2]

Kenny Dermot is described as a 'fanboy' of Nick Ramos.

Time for a Hero[]

Nick first encounters Kenny hiding in the Big Buck Construction Site. Kenny is panicking, as he was not able to save anybody because he is too weak. Nick offers him words of encouragement, but Kenny still believes that he's useless.

He'll ask Nick to kill five zombies unarmed, to show his strength. Afterwards, Nick will tell Kenny about creating combo weapons, and Nick will have to build one as a demonstration. Kenny then praises Nick for his abilities, and starts to feel better about himself as well. Finishing his requests will net Nick with 20,000 PP.

Kenny is becoming envious of Nick's reputation of being a 'hero'. He takes a lady hostage and proceeds to rescue her in an attempt to play hero. He even goes so far as to dress himself in a mechanic's outfit, and writes his new nickname on the name tag, Kick, which rhymes with Nick; something Nick himself points out.

As the hostage screams for help, Nick arrives and kills the zombie that was about to attack her, upsetting Kenny. Kenny yells at Nick, exclaiming Nick had ruined his "stunt". Kenny explains that he has changed his appearance and made a new nickname for himself, Kick. When Nick tries to argue about it, Kenny also mentions that he can create combo weapons, then creates his own. Claiming he is "better" than Nick and that he's been preparing and training in his mother's basement for a zombie infestation, Kenny begins attacking Nick.

After Kenny is defeated, he stumbles and is suddenly being swarmed by zombies. He apologizes to Nick, saying he wants to be his sidekick. Nick has a choice to save Kenny from the zombies, making him a rescuable survivor.

The Envious achievement will unlock after he is defeated. You will also get the blueprint for the Junk Ball.

Stats (Time For A Hero, Found In Files)[] 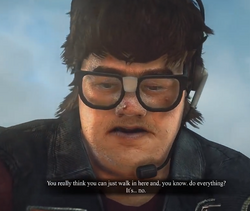 Kenny about to attack Nick.

Kenny during Time for a Hero