Cut From the Same Cloth

"Oh, Frank! Oh, Frank! How can you even show me crap like this? Y'know, I really don't think you're cut out for stuff like this. Oh, I cannot stop laughing!"
—Kent, on criticizing Frank's photography

He is an incredibly jealous photographer who was encountered in Paradise Plaza during the scoops Cut From the Same Cloth, Photo Challenge, and Photographer's Pride.

Cut From the Same Cloth[]

Kent is seen wandering in Paradise Plaza, shooting photos of zombies with his camera and shooting them with his handgun. As Frank approached him, Kent attempted to coach him on how to properly photograph a subject. He offered to model for Frank and challenged him to take better photos than the ones he took.

If Frank failed to photograph Kent as he requested, he will fail this scoop and Kent will not be encountered again.

500 prestige points, he will fail this scoop and Kent will walk away, laughing, and will not be encountered again.

Kent returned at noon the next day with a survivor, Tad Hawthorne. He revealed that he had the idea of taking a photo the moment a person is zombified, and throws a zombie larva at Tad. Enraged‚ Frank quickly stomps on it, saving Tad and ruining Kent's shot. This prompted Kent to attack Frank in anger and disbelief.

If Frank failed to show up before noon, Kent will reveal that he has already shot his desired photo, showing Frank a picture of Tad with a parasite crawling into his mouth. He then pointed his gun at Frank's head and stripped him of his clothes and weapons. After declaring that a photograph of Frank being killed will bring him to the top, Kent attacked Frank.

Regardless of whether Frank showed up before noon or not, after he is defeated, Kent requested Frank to take a picture of him as he dies, saying "It'll look great on your mantle." Frank refused and tossed Kent's camera away in disgust as the fallen photographer dies.

Defeating Kent rewards Frank with a photography book, which respawns in front of Colombian Roastmasters in Paradise Plaza.

In Infinity Mode, Kent first appears at the Paradise Plaza from 2:07:00 to 3:00:00 and is armed with a Handgun. In his equipment he carries a Pie, a Coffee Creamer, a Well Done Steak and a Sword. Later Kent appears at Warehouse from 5:00:00 to 5:07:00 and he carries the same items he had before.

In Chop Till You Drop, Kent appears as a zombie. Zombie Kent wears a camera around his neck that flashes at regular intervals. He can attack Frank by a jump kick, by firing his handgun at him, or by throwing a grenade.

Unlike most other psychopaths, Kent does not possess a unique weapon. Aside from his camera, he uses only a handgun. However, his speed and the possibility to strip Frank of his weapons makes Kent a legitimate opponent. 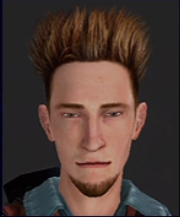 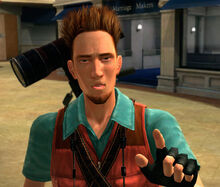 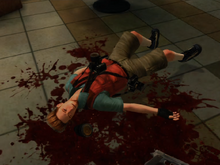 Zombie Kent in the Entrance Plaza. 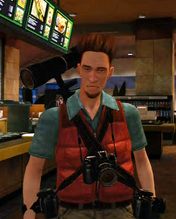 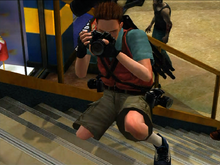 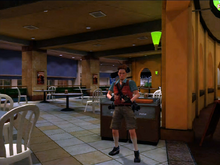 Photos taken during "Cut From the Same Cloth" scoop. 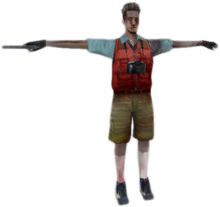 Zombie Kent, Chop Till You Drop.