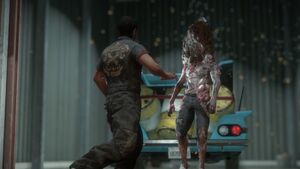 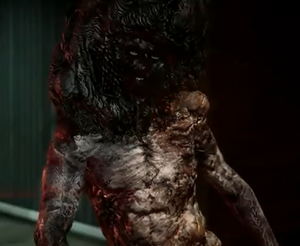 King Zombie is a special mutation seen on certain zombies in Dead Rising 3.

They appear after Nick opens the storage container in Central Storage during Chapter 4. After this, they become a regular enemy and appear in regular zombie hordes. Defeating them will yield additional PP.

It seems these zombies are created when a certain type of radiation is applied on people with anti-zombification chips, making them mutate even worse than Gas Zombies. These zombies are tall, wear only a pair of jeans and have multiple boils around the body. Their most noticeable feature is the beehive that the wasps build around their heads and neck. While their introductory cutscene shows them with the ability to 'send' a swarm of wasps to nearby zombies, enraging them to attack anything alive near them, they will not do this in gameplay and only make nearby zombies as aggressive and durable as they are during nighttime.

They are far stronger and durable than common zombies but when killed, their upper body explode in a mix of an unknown green substance (that has the same properties as the vomit blood from Gas Zombies), which damages anything within its radius.

There is another variant which lacks the beehive. It is a tall, bald zombie that is faster and has the same attack pattern from prisoner zombies. While it doesn't have the ability to send wasps, they still can explode when killed.

During Overtime Mode, General Hemlock harvests the King Zombies in hopes that he will be able to make a virus that he can spread worldwide. By doing this, the entire world would enter a state of martial law. His plan is to get rid of all human life but to leave all of the infrastructure intact.

Retrieved from "https://deadrising.fandom.com/wiki/King_Zombie?oldid=393661"
Community content is available under CC-BY-SA unless otherwise noted.