A showgirl with a love for drinking. Found in the Security room of the Americana casino.

"I know I've said this before, but that's the last time I drink that much."
—Kristin, arriving at the Safe House

Before the zombie outbreak, Kristin worked as a show girl in Fortune City. The night before the outbreak, she is partying at a bachelor party with a man named Josh and his friends. The partygoers keep buying Kristin drinks until she passed out. The next day, she is found throwing up inside of a security room in the Americana Casino due to her drinking heavily the night before. Due to passing out, she is unaware of the zombies, still slurring her words and talking about how attractive Tyrone King is. Once Chuck makes the zombie outbreak aware to her, she will go with Chuck to the Safe House.

Kristin moves very slowly, but can be carried or transported by wheelchair to the Fortune City Emergency Shelter.

After being escorted back to the Safe House, she will don a blue robe and a pair of red high heels. Also, she and two other survivors may challenge Chuck to a game of strip poker in the mission Ante Up.

Kristin wearing a combination of her two outfits (mod).

Kristin: I know I've said it before, but that's the last time I'll drink that much. 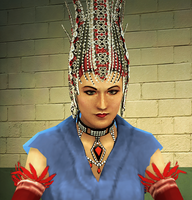 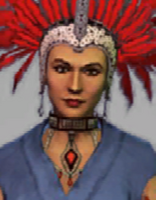 Notebook Portrait in Dead Rising 2: Off The Record. 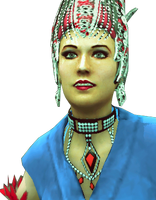 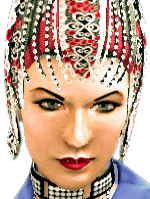 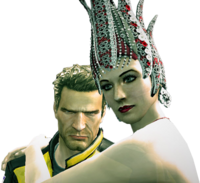 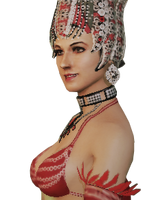