TIR Contestant. Found in the Arena.

Kristopher Bookmiller, also known as Kris is a survivor in Dead Rising 2. He is a contestant on the controversial reality game show Terror is Reality, and was caught up in the zombie outbreak in Fortune City. He reappears in Dead Rising 2: Off the Record with the same role.

In the Introduction, Kris competed against Chuck Greene, Leon Bell, and Anim White in the Terror is Reality event. After the show, Chuck asks him where the green room is located so that he can get his daughter after the show.

During the outbreak, Kris and Anim were able to escape the Arena unharmed and evacuate to the Fortune City Emergency Shelter, before the doors were sealed after the last group of survivors was admitted into the shelter. As he did not have the time to dress properly while escaping the zombies, Kris has only a towel around his waist.

In the case Case 6-4: Breach, when the shelter is breached, he is seen being attacked by a crowd of zombies, but survives after defending himself long enough until the emergency doors were sealed.

Kris is one of the crazed survivors Frank can fight in Sandbox Mode. He will spawn in Palisades Mall with a massager. Once defeated, he drops his weapon and $10,000.

Kris in the Safe House.

Kris in his TiR outfit. 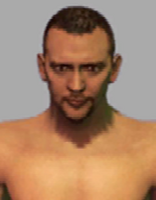 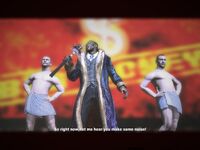