The pants wearer. Found in The Dark Bean in Royal Flush Plaza.

Happily Ever After... Sort Of

"He might not have been brave, but Gordon's still my baby."
—LaShawndra, about Gordon

LaShawndra Dawkins is a survivor found at The Dark Bean at a quarter to 7am on the first day in Dead Rising 2. She is described by Chuck as a "'big-boned' woman in yellow" when speaking to Gordon. She reappears in Dead Rising 2: Off the Record with the same role.

Happily Ever After... Sort Of[]

In the unmarked mission Happily Ever After... Sort Of, Chuck leaves the Safe House to find a woman in a yellow dress standing on top of a counter at The Dark Bean in the Royal Flush Plaza, surrounded by a small crowd of zombies. She does not appear frightened by the zombies, instead she is quite upset over the fact that her husband ran off. She complains "what kind of man leaves a beautiful woman like [her] out here alone?". She tells Chuck that if her husband Gordon stayed with her, she could have saved his "skinny ass".

Chuck convinces the woman that he will help her find Gordon and so she joins his party. After they find Gordon, the couple reunite and make up LaShawndra smacks Gordon for running off. Chuck interrupts the couple and reminds them of the Safe House, in which they follow him to the air vent and wait in the safety of the shelter.

LaShawndra is one of the crazed survivors Frank can fight in Sandbox Mode. She will spawn in the Food Court with a lead pipe. Once defeated, she drops her weapon and $10,000.

LaShawndra is brought back to the shelter...

...with her husband, Gordon 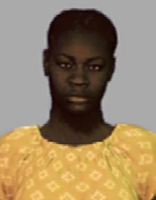 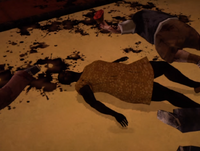 Photo Op in Off the Record
Community content is available under CC-BY-SA unless otherwise noted.
Advertisement